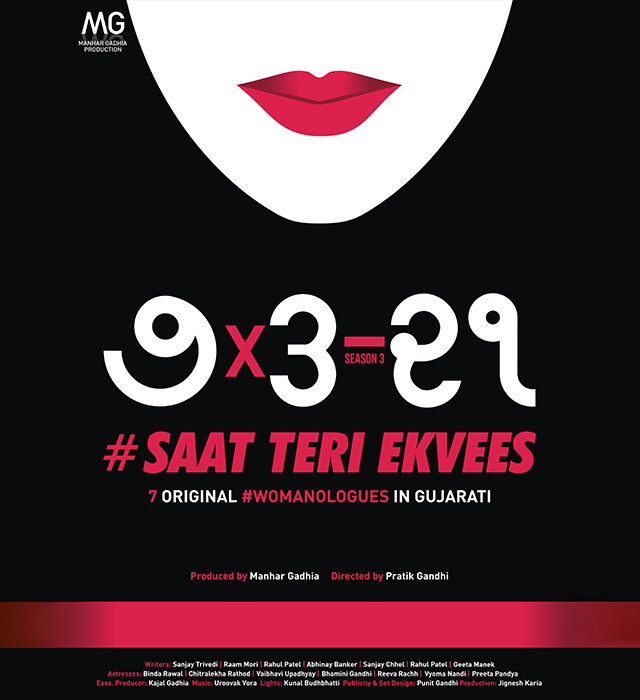 Manhar Gadhia who has been a prominent name in the field of commercial and experimental Gujarati theatre, is back after a hiatus with his latest production, Saat Teri Ekvis season 3. The new set of monologues has an underlying theme “desire”. Enlightening us more on this, Mr. Gadhia shares, “There’s a lot of talent waiting to be appreciated. While collating for stories, I selected 7 prolific writers whose fresh approach to the subject will surely strike a chord in the minds and hearts of the audience. We chose some of the well known
faces from television and theatre as well as some new dynamic actors. To direct these fresh stories and talented lot, I selected Pratik Gandhi – a director’s actor whose attention to detail and passion for the craft has been most impressive and so will be his new role as an actor’s director.”
Pratik Gandhi is taking the baton of directing these talented women for the latest outing of Saat Teri Ekvis. It was something he wanted to try for a long time, “As an actor, I have always been directed by some of the best people in the industry. I started performing monologues with the first season of Saat Teri Ekvis and then came back to perform for the second season as well. I feel monologues hone an actor’s skill, as one doesn’t have any other actor to support one’s performance, just props. So it pushes an actor to create that strong engagement with the audience for the span of the performance. As I wanted to gradually head towards directing and Mr. Gadhia showed faith in me and gave me this opportunity. For my directorial debut, we explored scripts revolving around desire from a woman’s perspective. Directing the #womanologues was a challenge and an absolute delight. Be it Survival, Intimacy, Being Oneself, Motherhood, Love, To Be Born or Appreciation, each mood is different, so is it’s energy. While some stories may evoke heart-warming smiles, others may evoke a soul-searching silence, but all will make one sit up and notice a woman’s soul with a new perspective. “